NB: THIS POST CONTAINS SOME HIGHLY DESCRIPTIVE PASSAGES ABOUT BUTCHERY, USING ANATOMICAL LANGUAGE. IF THAT’S NOT YOUR BAG, PLEASE SKIP IT.

At some point in the last two years, I had a small revelation. Obviously, though, I shall bang on for a couple of paragraphs before I reveal it.

Our family are big chicken-eaters, and for all the usual bad reasons: it’s cheap (even in its higher-welfare form), simple to cook and it’s virtually guaranteed to disappear into the childrens’ mouths, whatever method it’s cooked by.

Another factor is, I love eating chicken and I love cooking chicken. Even in the simplest possible preparation; seasoned with nothing but salt and pepper, and left alone in a hot oven for 75 minutes (this, after endless tinkering with various complex methods, is now my normal, go-to way to roast a chicken. I’ll put half an onion in the cavity if I’m feeling fancy), the special transformation that takes place, from pallid, unpromising flesh to a crisp, aromatic vision that, to borrow Nigel Slater’s phrase ’emerges, singing, from the oven’, is one of the great wonders of food. It’s hard to imagine anything within the realms of cooking that, with quite so little input from the chef, undergoes such a magical change, and produces such an unimprovably satisfying meal.

Anyway, revelation time: it struck me at some point that, rather than buying pre-butchered chicken pieces for whatever given recipe I was planning for dinner, I’d be far better off, to the tune of quite-a-lot per kilo (the absolutely extortionate price of chicken breast per-kg compared to the rest of the bird, especially given that A: it’s not the tastiest or most useful bit and B: a chicken has two of pretty much everything, has always mystified me), just buying two or three chickens, jointing them myself, and storing away the separate parts ready for use.

This means, from a single bird, you get:

Now, I don’t know what you pay for your chicken but, like for like, I can almost guarantee that you’ll save a load of money by doing this. You’ll also get the satisfaction of learning to do A Thing, and you’ll also probably get bigger, neater pieces of chicken that better suit whatever recipe you’re attempting. 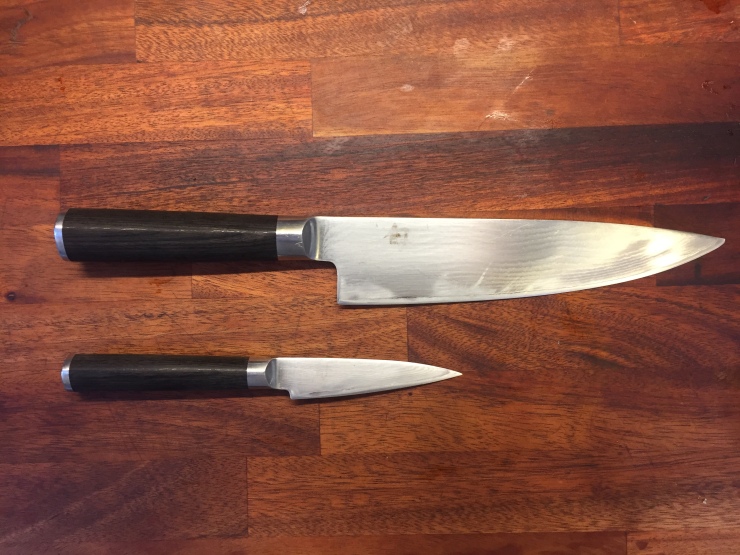 Anyway, you will need: 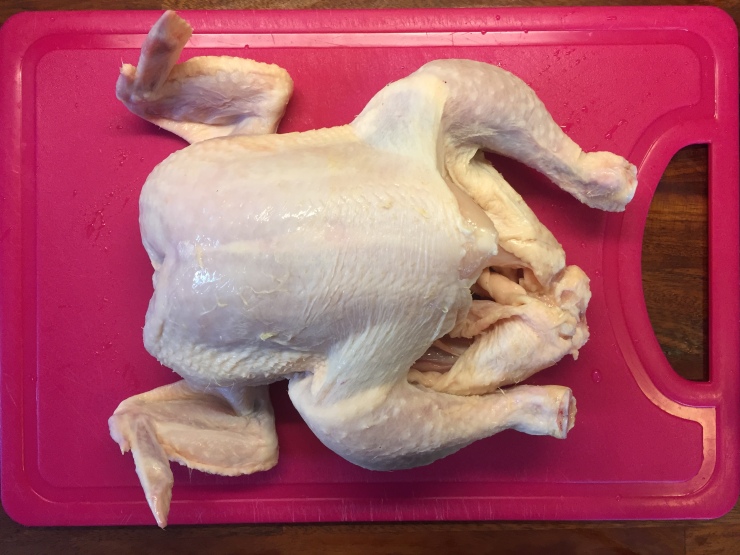 First, cut the legs off: Cut through the skin where the thigh meets the breast. Turn the bird over, and pull up the leg until you hear the thigh joint detach from the body (a slight ‘crunch’). With your paring knife, begin to cut the leg off, where the thigh meets the back. Follow as closely to the carcass as you can and, using the tip of the knife, try to detach the meat from the convex area beneath the shoulder blade (this will mean the so-called ‘oyster’, widely considered to be The Best Bit, is attached to the thigh). Keep following around until you reach the joint. Switch to your big knife, and try to find the point where you simply have to slice through the connective ligaments. You may have to do a little cleaving here (with the heel of your bigger knife) but probably not. Repeat with the other leg.

Next, remove the breasts. Use your bigger knife to cut the meat away from the breastbone, from front to back, using the central ridge of cartilage as a guide. When you reach the wishbone at the bottom end of the breast, stay close to it with your knife and follow it around until you reach the joint where the wing meets the body. Use your bigger knife to continue cutting the long side of the breast away from the body, staying as close to the ribcage as possible, until the whole breast is only attached to the body by the wing-joint. As you did with the leg, cut or cleave through the ligaments and remove the breasts. Either cut away the wing for a bone-free fillet, or cleave through the joint where the upper-wing and fore-wing meet (you might have to take more of a swing at this; use the heel of your knife and, for god’s sakes, keep your fingers out of the way) to make a ‘supreme‘. Peel away the ‘mini fillets’, the small interior of the breast that sits between the main breast and the ribcage, by hand; they should come away pretty freely.

At this stage, you can either leave the joints as they are, or create eight more even-sized pieces (this is good for braising or casserole) by halving the breasts widthways and cleaving the joint between the thigh and drumstick.

An there it is. Laid out in writing, it seems rather complex but, after a couple of goes, it all becomes pretty intuitive, and is really the work of five minutes, even for an average home-cook like myself. The carcass can go in the stockpot (or more probably, the freezer, ready to make stock at a convenient time) possibly along with the wings, depending on how serious you are about amassing enough for more than a snack, and the rest can be bagged up, like-for-like, ready for use.

Following this method, two chickens will, for a family of four like ours, very easily stretch to three large meals, and will often extend to more when you include the stock you can make from the carcass and any leftovers that can be recycled through fried rice, noodles, sandwiches, pies, salads and goodness knows what besides.

It’s a self-evidently worthwhile practice, and I highly recommend it.

2 thoughts on “Cutting Up A Chicken”