I can’t imagine life without bread. Not a good, happy life, anyway. I wholly reject the bad press that Bread gets from those looking to lose weight, as well as the trend for pseudoscientific attacks on cereal crops on the basis of their absence from the Palaeolithic diet, or the supposed inability of the body to process gluten (I know a few people for whom this is actually true, and all curse it, but for the most part, the trend is nonsense) or whatever which, let’s face it, are all aimed at people who want to lose weight too, but feel they’re too clever to simply want to do so for aesthetic reasons. Bread is culture, history, cuisine, art and anthropology. It is present on the lowest table, and the highest. Who could walk through Paris, past the boulangeries, with a sweet, unmistakable smell of caramelising crusts wafting out into the street, and not be tantalised by thoughts of bread? Not I.

Of course, in the renaissance of the home-made we currently seem to be undergoing, bread has suddenly got good; even my old London neighbourhood of Leyton, whose main highlights were once a park for the drunks to sit in and a Tesco Metro, now boasts at least one sourdough bakery, and it seems like nobody in a major city lives far away from a beautifully made loaf of bread. The trouble is, good bread takes space, and time, both of which are expensive, and that’s what you’re paying for. For a standard sized loaf of ‘artisan’ bread, you’re unlikely to see a lot, if any, change from a fiver.

Luckily for the home cook, the actual ingredients in bread are so cheap as to cost next to nothing. In the austere world of sourdough, where you need nothing more than flour, salt, water and time, you’re really looking at an outlay of just over 30p per loaf. What is more, it’ll be fresher and, after a bit of practice, more infinitely customisable than any loaf of bread you could possibly buy in a bakery. Everyone should be making bread.

In this post, so as not to scare anyone off, I’ll give simple instructions for how to make a yeasted, mainly white loaf that is, as near as possible, idiot-proof. There are no special techniques, there’s not any kneading to speak of, and all one need do is just follow each step. Like many others I was, at one point, convinced I couldn’t make bread and, dissuaded by complicated, sometimes expensive recipes, I just gave up. This should be the antidote to that exact problem.

You will also need:

First, carefully weigh together your flours. Have a spoon handy and, if you go wrong by more than a gram or two, correct the weight. The important thing is that you end up with 500g of flour. If you like, whisk the flours together, though they tend to mix together well enough on their own.

Next, on opposite sides of the bowl (some people swear this seperation is necessary and others say it’s nonsense, so I’ve always tended to do it just in case) add your yeast and salt. To be on the safe side, you can pre-weigh these (your yeast will probably be a 7g portion anyway) so you don’t add too much.

Next, make a well in the centre and pour in your water. In most good bread recipes, water is measured by weight rather than volume, purely cause small inconsistencies can make a big difference to the end product, so weigh carefully and, if you’re going to be wrong by a few grams, make sure there’s too much, rather than too little.

Mix this all together, either with a dough scraper or your hands (you can use a stand mixer if you have one, but there’s really no need for this recipe) until it’s combined, cover the bowl with clingfilm or a moist tea towel and leave it for half an hour at room temperature. This pre-kneading process is called ‘Autolysis’, and you can read about it, and why it’s useful HERE.

By now, your dough has probably grown very slightly, but not a lot. Scoop your hand underneath one side, stretch the dough upwards, and fold it over to the other side. Give the bowl a quarter-turn, and do the same again. Repeat this process several times until the dough looks like it’s beginning to support its own weight and take the natural form of a very rough, squashy ball. You’ll find, with each turn and fold, that the dough becomes harder to stretch, and that it comes away from the side of the bowl more easily. This is as it should be. Cover, and leave for a further two hours. It should roughly double in size.

Now, it’s time to shape your loaf. Flour a large clean surface, and turn out your risen dough carefully, either using a dough scraper, or a floured hand. Carefully stretch out one corner of the dough, and fold it over to the opposite side. Repeat this with the other three corners of the dough. Now take each new corner (imagine I’m talking about a square of paper here, and you’ll see what I mean) and do the same. Turn the dough over and begin to shape it into a round, by bringing your hands together underneath it whilst turning it. This technique should give you a nice, taut surface on top of your round, where you can see air-bubbles almost straining to escape. Either upend this into your proving basket or bowl, or carefully place seam-side-down on your flour or semolina coated board. Leave for a further half an hour. 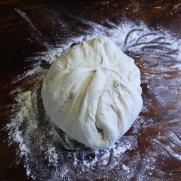 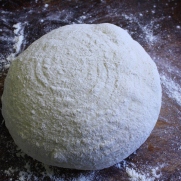 Ready for the Basket

Whilst this final prove takes place, put your cast iron pot, lid and all into the oven, and pre-heat it to 250°C. On most domestic ovens, this, conveniently, will take around half an hour, but if it’s quicker, just leave it in there so your bread can finish proving.

After the final prove, turn your bread out onto a board covered with either flour or, better still, semolina (if you’ve done your final prove on a board, you can obviously skip this), take your pot out of the oven, slash a cross into the top of your dough (using either a bread knife or something very sharp) and carefully slide it into the pot. Quickly clap the lid on, and put it in the oven for 20 minutes, after which you should take off the lid and leave to cook for a further 20 minutes.

When you take your pot out of the oven after 40 minutes’ cooking time, you’ll be greeted by a wonderful sight, aroma and sense of self-worth. That pale lump of dough will have ballooned into a beautiful, golden loaf, opening out like a flour where you made your slashes. It really is the most magnificent transformation.

However tempted you may be, don’t cut in straight away (the idea that bread fresh from the oven is at its best is a myth; it’ll simply tear, and won’t taste as good as it smells), but transfer it to a rack and leave it to cool for a bit before taking your first delicious slice.

If you’ve never made bread before, I urge you to try. It’ll change your life.

NB – this recipe is based on one written by the great James Morton, and it’s what first sparked my love affair with bread making, four or five years ago. I wholeheartedly recommend James’ book ‘Brilliant Bread’ as a home-baker’s guide, and also as a primer on sourdough baking, which I guarantee you’ll want to get into after making this yeasted bread a few times.

I assure you, it’s not. There are five stages above, all of them simple.

I don’t have time

This, perhaps is slightly more legitimate. Done in one go, this is a process that takes just under four hours (albeit with only fifteen minutes or so of that spent in the kitchen). This can be got around though: both stages of proving can be ‘retarded’ or slowed down by putting your bowl or proving basket in the fridge, where it’ll be quite happy for 6-10 hours. So, if you work 9-5, either prepare your dough in the morning and prove it in the fridge through the day, taking it out for a second prove and bake when you get home, or do the whole recipe up to the second prove in the evening (most of which is the two-hour prove, during which you can watch a film or walk the dog or whatever), then take it straight out of the fridge for baking in the morning. You can even retard both proves, and really take your time with it. It’ll do the finished bread no harm, and can even improve the crust.

Yes, it might, but it’s a lot simpler than you think

I don’t have a cast iron pot

A cast iron pot is widely regarded to be the best domestic recreation of the steamy conditions of a professional bread oven, but you certainly don’t need one. A baking stone or, at a push, very heavy oven tray, preheated as you would the pot, is a perfectly feasible substitute. You can create a bit of steam by throwing half a mug of water into the bottom of the preheated oven when you put the bread in and quickly closing the door.