In Sweden, every friday, the nation indulges. There’s a fairly extensive history to it, but basically it means the country makes tacos for dinner, eats crisps and dip, and then drinks copiously for the first time in five days. It’s called Fredagsmys (Fredags = Friday’s, Mys = Cosy) and, without particularly meaning to, I’ve found myself shopping for taco stuff on a Friday afternoon. This is the point where I could make a ‘Stockholm Syndrome’ joke, but I won’t. I won’t.

Now, in the grand tradition of entirely inauthentic but somehow delicious food that has characterised almost all non-European cuisine in Europe, from Curries, to Chinese food, to Turkish kebabs, to supermarket hummus, to pizza the dubious majesty of a kilo each of spaghetti, drowned in what we call ‘Bolognese Sauce’ (only get an Italian engaged in conversation on this issue if you have no immediate plans), I shan’t even deign to call this recipe ‘Mexican’, it’s just nice food. There are big, complicated, sensitive conversations to be had about authenticity, influence and appropriation in food, but I shan’t have any of them here, I shall just tell you what we eat on a friday. It’s bloody delicious.

I also won’t call this ‘chilli’ or ‘pulled pork’ or anything, as everyone has a picture in their head of what those things should be. This braise is very simple, using no tomatoes, garlic, carrots, celery, or any of that. It’s basically just fried onions, pork and spices, braised til falling apart, then mixed in with beans. Who could have a problem with that?

This looks like a long list of stuff, but half of it’ll be in any well stocked kitchen already.

For the Taco Assembly:

Well in advance, prepare the pork (you can always reheat it, so do this a day in advance if it’s easier to). First brown the meat in some oil in a hot high-sided pan or casserole. If you’re using a whole piece of meat, brown it a side at a time, turning only when you’ve achieved a crisp, golden texture. If you’re using diced meat, as I was, brown in small batches, never crowding the pan to the point where the pieces are touching.

Once the meat has browned, remove to a plate and turn the heat right down, adding a little more oil if the pan looks dry, and add your sliced onion. Move it all around in the pan a little to coat with oil, and then leave, giving the odd stir, for a minimum of 20 minutes, and a maximum of about 40. You’re aiming for a golden brown, jammy consistency, with a greater colour than required for a fine French consommé or whatever, but no blackness whatsoever (it’s important to get the onions well browned in this recipe, as that caramelisation is the source of much of the flavour). Add the dry spices, stir them in, and leave to fry for a minute or two, before returning the meat to the pan, and stirring it together to coat.

Pour in the stock til it’s level with the top of the meat and almost covering it, then turn up the heat and bring to a lively boil. Partially cover with a lid, turn the heat down very low and leave for an hour. After this time, remove the lid, and simmer away for another hour. You’re aiming for a fairly dry sauce and, after two hours’ braising, the meat should be falling apart. If you’re using a whole piece of meat, you may want to pull it apart with a pair of forks or spoons at this stage, but if you’re using diced pieces, a few stirs with a wooden spoon will probably be enough for them to pretty much fall apart.

Add your kidney (or other) beans, your liquid smoke if using, season to taste, warm through, and set aside, ready for taco-stuffing.

While the meat is braising, assemble your guacamole. Put all the ingredients in a bowl and stir with a fork, mashing a little as you go, but not so much that you get too smooth a consistency. You’re after a chunky sauce with the odd almost whole piece of avocado nestling within. Season to taste. 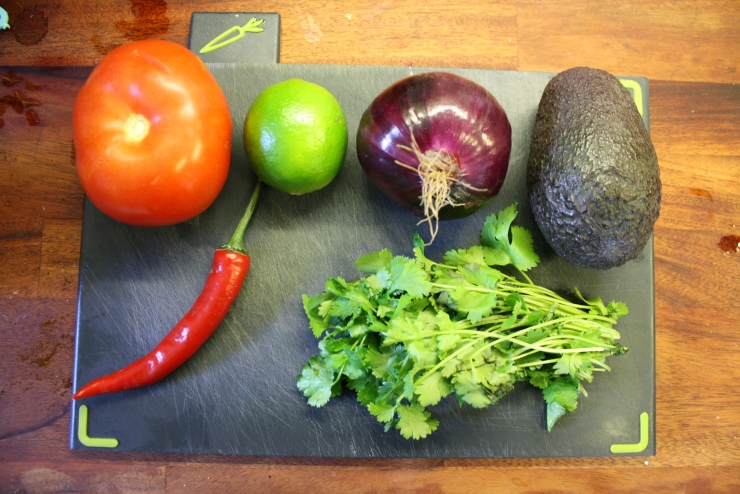 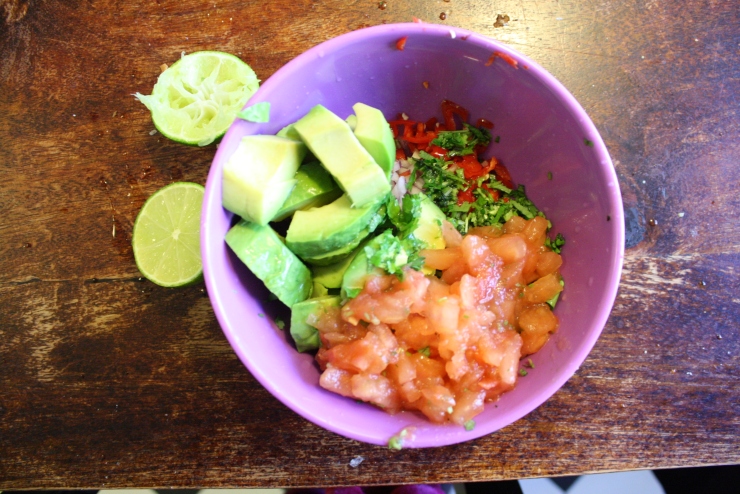 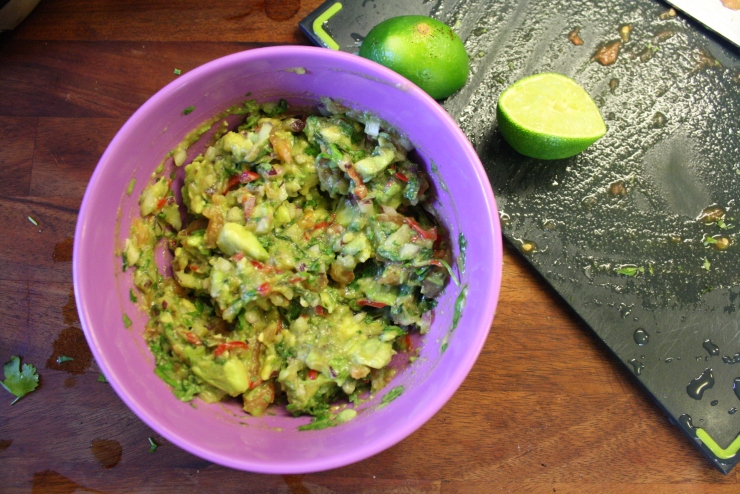 Heat your tacos according to the specifications of the packet, lay everything out in the middle of the table, then get stuffing, in any order you like, adding or omitting the elements as is your wont. Half the fun of this, it being a Friday, is to have it how you like it, with no eye on the consequences.

My usual practice is to eat until my stomach hurts, and then have one more, just to push myself into the realm of discomfort.