As I get older, I find I want to do less and less to food to prepare it, and appreciate a few nice things, carefully cooked. I think, when most people start learning to cook, the tendency is to add more of the tastes they like, all the time; I remember roast chickens from my early 20s with herb butter stuffed under the skin, three types of aromatics in the cavity, roasted upside down, then rotated half way through cooking. Now, more often than not, I sprinkle a bird with salt and pepper, stick it in the oven, forget about it for just over an hour, and leave it to rest while I throw together a salad and, the truth of it is, it’s better.

The joy of using two or three nice ingredients is that you really give the flavours a chance to sing. A good steak, wants nothing more than a generous seasoning and griddling, a whole aubergine, burned on a barbecue, then split open and scraped out is one of the most delicious, surprising flavours on earth, and some potatoes, fried simply in butter, feel like they impart the pure essence of potato-ness; if I were a more sentimental fellow, I’d think of them as potatoes like they used to be.

This is a good side dish for almost anything, particularly a simply cooked protein: A chop, roasted meat, grilled fish, or even just a substantial salad.

Put a large shallow pan with a fitting lid on a medium low heat, and slice the potatoes in half. You want enough to cover the bottom of your pan, but no more. We don’t want any piling up here. 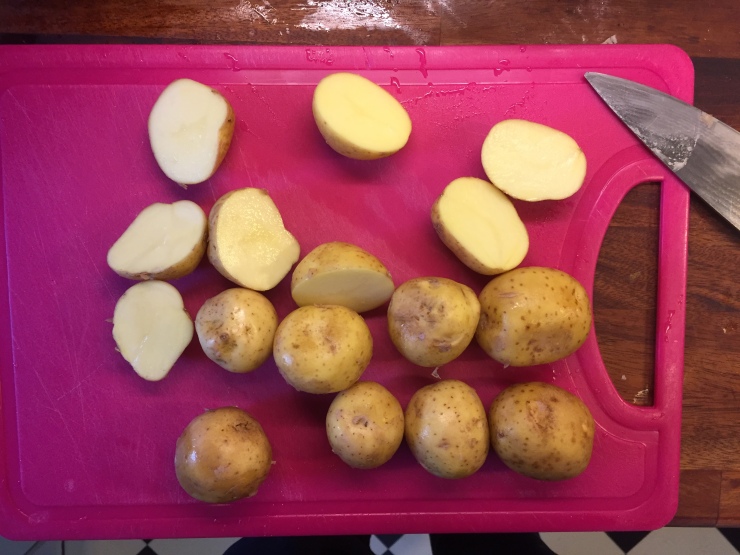 Lightly crush each clove of garlic with the flat of a knife so the skins remain intact, just slightly split.

Toss the butter into the pan, til it bubbles appealingly and begins to smell nutty. Add the potatoes, cut-side down, so they sit in a single layer. Throw in the garlic, and give the pan a shake to even everything out. 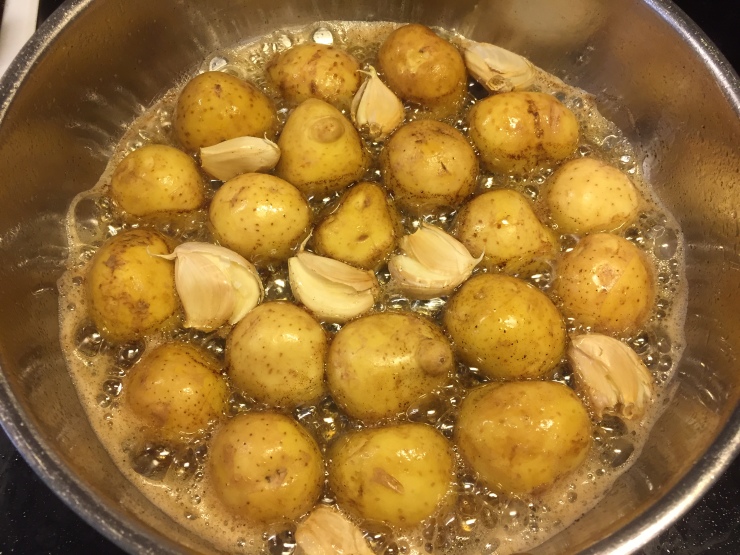 Leave the potatoes, pretty much untouched, bar the odd shake of the pan, for about ten minutes, or until the cut undersides are a tempting golden brown. Season generously all over with salt and pepper, then flip everything over piece by piece, garlic and potatoes.

Clap on the lid, and leave for a further 10 minutes, checking the potatoes for doneness with a skewer or fork (we have a dedicated potato-poker in our kitchen, and I value it extremely highly) after about 8 minutes.

Remove the potatoes to a warm bowl, and the garlic too, if it isn’t blackened (it shouldn’t be, if the skins remained intact to protect the cloves from the direct heat) and eat while warm.

The potatoes will be golden, crisp, garlicky and perhaps slightly puffy. I can imagine nothing better to have on the side of a meal. We ate ours with some simple roast chicken (as described above) and a simple salad.

The key is simplicity, taste and following your nose.

1 thought on “Fried Potatoes and Garlic”