It’s the Swedish Summer and, as a result, the Stockholmares are doing what they do best, and partaking in a mass exodus to the countryside, leaving the stresses and strains of city  life behind and pottering around in their summer houses. My family are no different and have done just that, but I have a few more things to take care of in town, and will hop on the train later in the week to join them.

In the meantime, after the best part of 15 years of domestic bliss, I’m having a rare spell of time alone at home. There’s plenty to do, and not a great deal of time spent putting my feet up, or whatever other grim cliche of lone husbandhood may spring to mind, but it’s still rather odd, not least when I find myself wandering around the supermarket, shopping for dinner for one; I stand in the fruit isle, filling my basket with bunches of bananas and boxes of nectarines, only to slap my forehead and put them back on the shelves; I take two litres of milk from the fridge, then put both back, remembering that, as the one member of the family who drinks none of it, it’ll simply go bad; I stare glumly into the meat fridge at whole chickens, joints of pork that are wholly unsuitable as Dinner For One Person.

In the end, I snap out of it and try and think practically. I grab a Lamb Entrecôte (which Brits would most likely find labelled as Neck Fillet) which is on it’s last day on the shelf and has 50% off, a bunch of parsley, a head of Romaine Lettuce and then decide I’ll leave the rest of dinner to whatever’s in the house.

The house does well for itself, and I’m able to dig out a slightly venerable aubergine, a jar of anchovies, some capers, a lime and some garlic to throw together what turned out to be a very respectable dinner.

And for the sauce

Set two pans on the heat, one high, one medium. Throw a generous serving of cubed butter, a good 100g, into the medium pan, til it bubbles, season the lamb with salt and pepper and place it carefully in the pan, turning and basting regularly for about 20 minutes, or until the flesh easily springs back when firmly pressed with a thumb (if you’re lucky enough to have a meat thermometer, it should read 65º or thereabouts). When it’s done, take it out of the pan to rest for 5-10 minutes.

Meanwhile, cover the bottom of the hottest pan with a neutral oil (I use rapeseed), and throw in the cubed aubergine, turning it with a slotted spoon til deep brown. In the last minute of cooking, finely slice one half of the garlic clove and throw it into the pan, removing everything to drain on kitchen paper just as the garlic begins to colour. 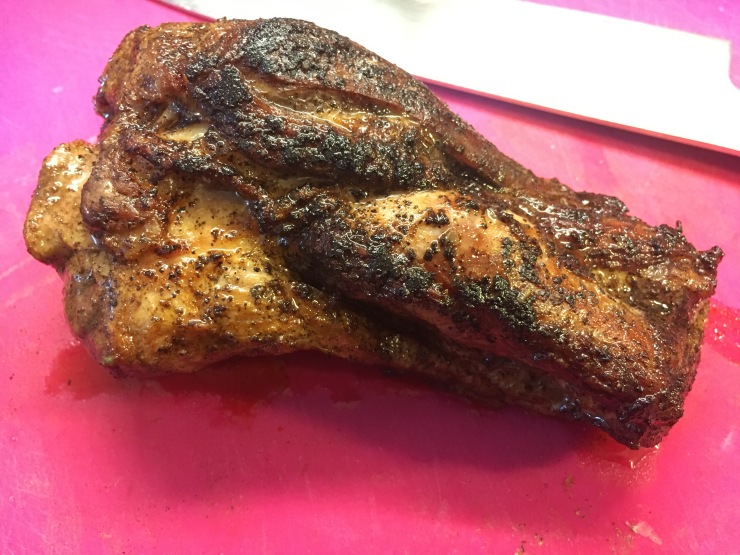 As the other ingredients are in the pan, put all the sauce ingredients in a blender (or use a stick blender) and mix til smooth (if you feel really energetic, use a pestle and mortar, crushing the garlic, capers and anchovies first, then grinding in the rest of the ingredients). Set aside til needed.

Quickly chop and dress a simple salad (I used Romaine lettuce leaves, spring onion, walnuts and parmesan, but anything will do) then place the salad and aubergines on a plate, before slicing that lamb, adding it to the plate, then drizzling it with the green sauce. Be generous with everything; this is a carbless meal, and you need to work a little harder to fill yourself up without a heap of chips or whatever.

It may all sound a bit of a palaver, but alone, in your own house, it really isn’t. It’s around half an hour at the stove, and it provides you with a respectable dinner that’s a million miles from the kind of shameful affair you could be indulging in in the absence of your family. And that’s a good thing, right?