The eagle-eyed will notice that this recipe begins in a very similar way to the Chicken Curry one I posted recently and indeed, this is, to all intents and purposes, a curry, but it has too many steps that set it apart from a proper Indian recipe to make that link, and I really intend it to work as a kind of substitute Sunday roast – something you can stick in the oven early in the day, forget about whilst you do whatever you like to do on a Sunday, and then take out a little before dinner and finish off in a leisurely manner.

This is essentially based on a Butter Chicken style sauce, and kind of crossed with a conventional pot roast.

You can use any stewing cut of beef you like, like skirt or chuck. but I think a nicely marbled Brisket is the best bet – it can take a good long period in the oven without drying out at all, and will impart an awful lot of delicious flavour into the sauce during its cooking time.

We ate it with some plain brown rice and some Cavolo Nero that I fried in bacon fat left over from breakfast, with some cumin and mustard seeds, some garlic and a squeeze of lemon (I’ll post a recipe for this later this week.)

As you can see, this has a hefty cooking time, so for most people it’s probably a weekend recipe. Whilst it cooks though, you can pretty much leave it to its own devices and get on with whatever else you like. 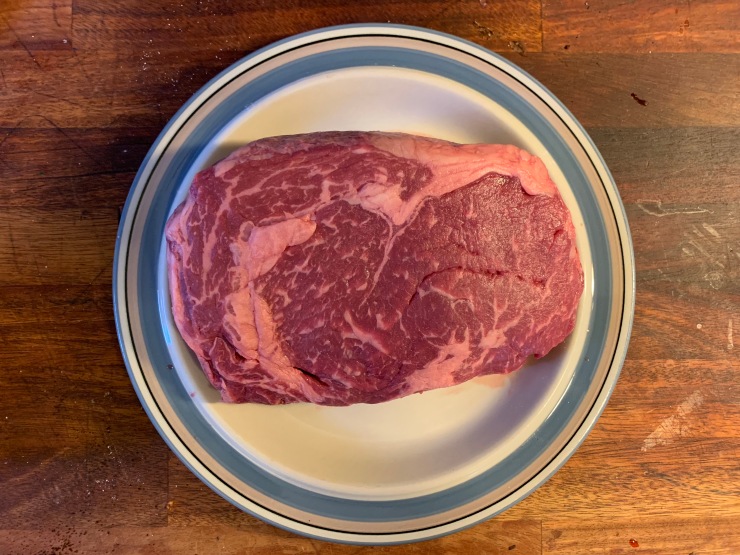 To feed four, you will need:

Put a heavy based, high sided pan with a fitting lid on the hop over a medium-high heat. Add enough oil to cover the bottom.

Put your brisket in the pan, browning deeply all over, turning carefully with tongs or a couple of forks as you go. When deep golden brown, lift out and put to one side.

Turn the heat right down and add the cumin seeds and the cinnamon stick. Fry for a minute or two til they smell fragrant but haven’t blackened at all.

The onions and whole spices 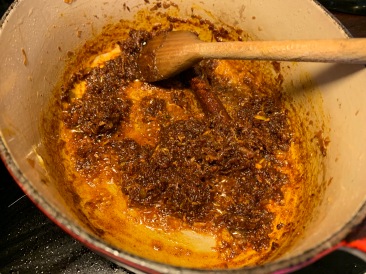 After the ground spices have been fried

If the pan seems dry, top up with oil, add the onions, stir well, and leave for a good 30 minutes at a carefully maintained low-medium heat, until they break down to a rich, jammy, brown state, but don’t burn at all.

Check the oil levels again, then add the ginger and garlic, stirring well and cooking for a couple of minutes til all raw smells have subsided and everything smells comfortingly and deeply delicious.

Add the dry spices, stir, and cook for about a minute, til everything is pasty and dark-but-not blackened.

Add the tomatoes, bring to a simmer, lower the heat, and then clap on a lid and cook for ten minutes, after which time they should have begun to break down quite a bit.

Lower your browned brisket into the sauce (it won’t cover it, and this is fine), return to a simmer, put the lid back on, and slide into the oven. Leave it for three to five hours, turning the meat over carefully once half way.

45 minutes before you’re ready to eat, put some rice (brown, white whatever you like) on to cook. The meat will now be tender and basically falling apart. Use a spatula or a big slotted spoon to very carefully lift the meat out of the sauce and onto a warm plate. Cover loosely with foil and set aside to rest.

The brisket half way thorough cooking… 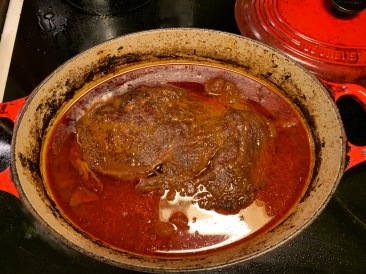 Lots of red-orange coloured fat from the brisket will have rendered during the cooking process and will be pooled on top of the tomato sauce. Get a bowl and carefully pour most of this into it from the pan (you can pop this bowl in the fridge and use the fat for something else. It’ll be great to start you off on another stew, roast potatoes or add depth and flavour to fried vegetables.) Simmer the remaining tomato sauce gently over a medium heat until it’s thickened a little, turn off the heat and pour in the cream. Take out the cinnamon stick. Now, either transfer the sauce to a blender and whizz for a good few minutes til totally smooth or, if you have one, do the same in the pan with a stick blender. Really go at it for anywhere up to five minutes until there’s so semblance of coarseness left; think Indian takeaway.

Bring the sauce back to a simmer, sprinkle over the garam masala, add the butter and then stir it all together til well combined, smooth and silky.

Carefully slice the brisket into thick hunks with a long sharp knife, lay them, on a deep warm platter, and pour over the sauce, covering the meat and pooling around it.

Put it in the middle of the table, with the rice and any greens you’ve prepared, and tuck in straight away.

If it’s getting as cold where you are as it is here, this should be the perfect thing to warm you up.