I think this is one of those things where on the one hand, you can’t go wrong (because it’s soup) and on the other, you’ll never please everyone (because people have such a fixed idea of what a Chicken Soup is), but this is my best attempt at it to date.

The idea of Chicken Soup I carry around in my head is of the tinned, ‘Cream of…’ kind you get from the supermarket, rather than the American or Jewish kinds with noodles that some reading this might be more familiar with. The fact is, pretty much every ethnic culture on earth seems to have a version of Chicken Soup, so I don’t think we need be too precious about things, and should really just go with what we fancy.

This recipe is based on a stock of roasted chicken wings and a very few other bits, simmered for a long time, til the wings break down and are ready to be picked for meat, which I’ve then added to a very simple soffrito, and spiked with cream and nutmeg. You can use carcasses or other bits of chicken for the stock if you like, but wings have the virtue of containing a lot of connective tissue that’ll give an unmatched gelatinous depth to the stock, as well as meat that it’s nigh on impossible to overcook. No rocket science, no clever tricks, just a really nice, comforting soup for the dark, chilly evenings which are now upon us.

The quantities here are huge –  for anywhere from 12-16 servings – just cause I figure you may as well make a lot when you’re making a freezable product that takes a long time, but feel absolutely free to divide up the quantities as you wish. This is not an exact science.

Feel very free to do the stages before the soffrito anywhere up to three days in advance, provided you feel you have space in the fridge.

Preheat your oven to as hot as it’ll go (or to at least 250ºC), then roast the chicken wings on a tray in a single layer for 30-45 minutes, or until they’ve taken on a lot of colour, even to the point of getting very dark in places. You can turn them half way if you like, but it won’t make the world of difference. 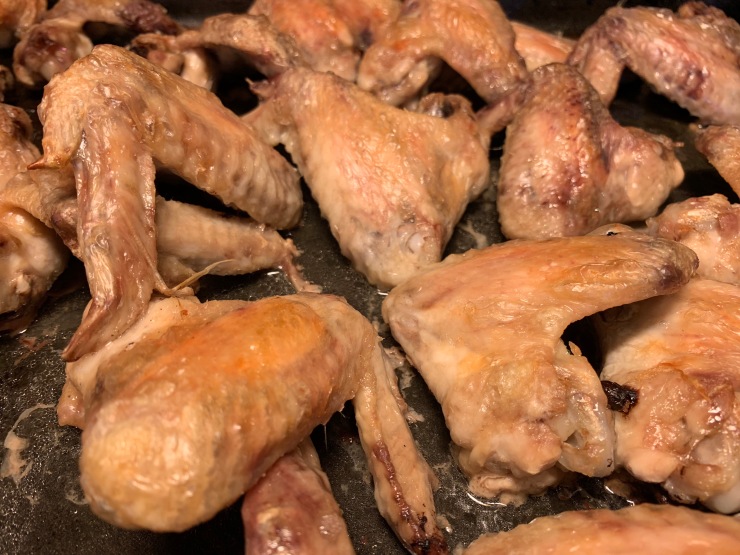 When they’re good and brown, tip them into the biggest pot you have, along with the dried mushrooms, spring onion trimmings, peppercorns, celery and parsley stalks. Cover the lot with plenty of water (no less than about 5 litres, and preferably closer to around 8) and bring to a rolling boil. Using a slotted spoon, skim off any discoloured foam that rises to the surface. Depending on the state of your chicken wings, there might not be a lot, but it’s worth cleaning up the stock at this stage if there is. You don’t need to skim obsessively though (this stock contains a lot of fat in the form of skin, so there could be a lot of white foam), just skim off anything that looks unappealing.

Reduce to a low simmer (like a really low simmer – on a gas hob, it’ll probably be as low as it can go) and pretty much forget about it and get on with your day for 4-5 hours, bar giving it the odd stir and topping up from a kettle if it looks like it’s drying out.

After this period, the contents of the pan should be a different proposition altogether, with nothing much identifiable as a chicken wing swirling around. A good test to see if you’re where you want to be with it is to have a fish around for a section with some connective sinews (like, the white, slightly translucent bits at the ends of the bones) – if there are now so insubstantial that they’re basically disintegrating, you’re there. I suppose it’s possible you won’t be able to find any at all, in which case you’re definitely there.

Fetch a fairly huge bowl and drain the stock through a colander (I see no need for straining through cloth or anything like that with a big, gutsy stock like this) and set the solids aside to cool slightly.

Now, the labour intensive part! Fish out the mushrooms and set aside, then pick over the wings and detach any pieces of meat, binning any bits of skin, bones or bits of onion or parsley. This’ll take ages, but just stick the radio on and get on with it. This is the price you pay for making really, really good soup and, considering what you’ll end up with, it’s a low one. You can also finely chop the mushrooms at this stage and add them to the chicken pickings.

Clean your big pan, and put it back on the hob on a very low heat. Add enough cooking oil to cover the bottom (or use butter, if you’re so moved), add the carrot, onion, leek and garlic. Pop on a lid and cook very gently for no less than 20 minutes, and anywhere up to 45, making sure the vegetables take on no colour, and merely break down into a translucent goo.

If you want the full canned soup experience, you can add a tablespoon of flour at this stage, and stir it over the heat for a couple of minutes to achieve a slightly thicker end product. I opted not to in this case.

Pour in the stock, and bring to the boil. tip in the chicken and mushroom pieces, pour in the cream and grate over the nutmeg. Simmer for about 10 minutes, warming the chicken through and probably very slightly thickening the soup.

Season very aggressively with salt and pepper. Really go for it, remembering that you’re seasoning on behalf of sixteen people. I ended up seasoning and tasting maybe four times.

Sprinkle over the parsley, stir and serve in warm bowls, drizzled with your finest extra virgin olive oil, with fresh bread and maybe even a salad on the side.

It may be a bit of a faff, but my goodness, it’s worth it.