I enjoy my life here in Sweden very much. We leave on the edge of a nature reserve, a short walk from a beautiful beach. In the summer, the forests are full of berries, which give way to mushrooms in the weeks leading up to the autumn. The markets are always piled high with beautiful, tempting things to cook and eat

That said, immigrant that I am, there are a few little things I miss: There’s nowhere quite like a British pub, no real Stockholm equivalent of the sea of curry houses and Turkish grills which litter east London and, until I moved, I never really understood what a peculiarly British thing the pork sausage was. Of course, pork sausages exist all over the world, and the germanic, smoked, frankfurter-style sausages that are plentiful and cheap here and wonderful and I love them dearly, but that very simple British sausage, with a high pork content, a little sage, salt and pepper, and very little else, is a very special thing and an itch I’ve found it difficult to scratch. Such sausages are available in Sweden, but they’re hard to come by, and can only be exchanged for a king’s ransom which, to me, rather defeats the entire point of a pork sausage, somehow.

In an attempt to scratch the itch, however, I’ve taken to making my own. I haven’t been able to get hold of any thick casings, and I’m in the early days of getting them how I want them, but it’s been a fun learning curve, and allowed me to revive a dinner I often used to make for us when we lived in London.

We had this with baked potatoes, but in an ideal world, make yourself a big pile of fluffy mashed potato, adorned with nothing but plenty of butter and some salt and pepper. Do yourself something green on the side if you’re on a diet.

For four people, you will need:

Put a large frying pan, preferably one that can accommodate all your sausages in a single layer, over a medium-high heat, add enough oil or butter to just cover the bottom, and quickly brown the sausages well all over, then set them to one side on a plate.

Lower the heat to low/medium and top up your oil if you have to, then tip the onions into the pan. Give them a stir to coat them in fat, and leave them alone, watching with half an eye, with little more than the occasional stir until they’re golden and jammy, but not at all blackened. Probably about 20-30 minutes.

Add a little more butter or oil if the pan seems dry, then sprinkle over the flour, stir and cook for a couple of minutes. The onions will stick together, and it may all look a little sticky and unappetising at this stage, but persevere!

Add the stock a little at a time, stirring between each addition and trying to avoid any lumps. once all the stock is in, add a dash of Worcestershire sauce, whisk in the mustard, and return the sausages to the pan. 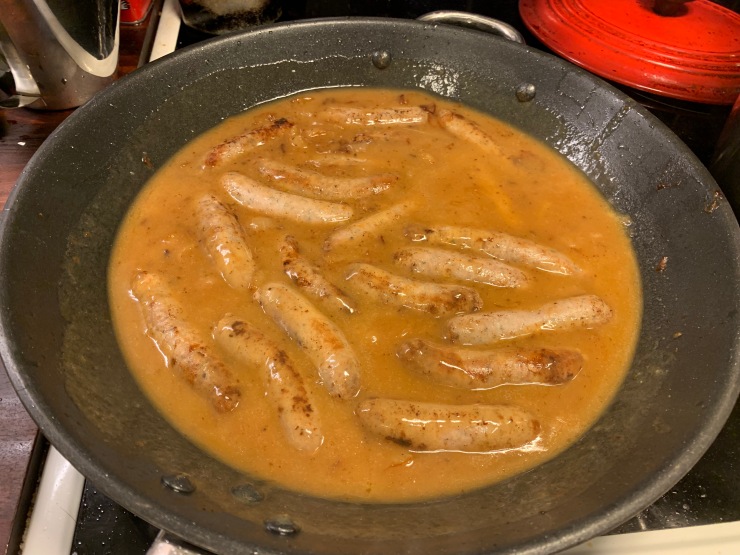 Season, taste, and season again, then pop the pan in the middle of the table and let everyone have at it.