To begin on a positive note, this is less of a recipe and more of a suggestion. I shall offer some ballpark timings and, for those who like that sort of thing, some optional temperature readings (which, to me, often mean the difference between Good and Less Good barbecued food) but by and large, this is me saying ‘put a chicken on the barbecue, wait til it’s cooked, then eat it.’

As an attendee of many barbecues, though, I’ll be the first to acknowledge that such a simple concept doesn’t always produce the desired result; thanks to the slightly less predictable source of heat barbecues provide, we’ve all become used to feeling a healthy fear of burned-on-the-outside-raw-on-the-inside food at the summer get-togethers of certain cooks. It needn’t be so, though. In this recipe, we’ll treat the barbecue as something more like an oven, rather than a direct grill, and we’ll give our whole chicken as much time as it needs to cook right through to the bone without burning or drying out whatsoever. In fact, in terms of succulence, particularly in the leaner areas of the bird that dry out more easily, I’ve never had better results than with using this method. Yup, the best roast chicken you ever eat will be made on your barbecue. Believe it! 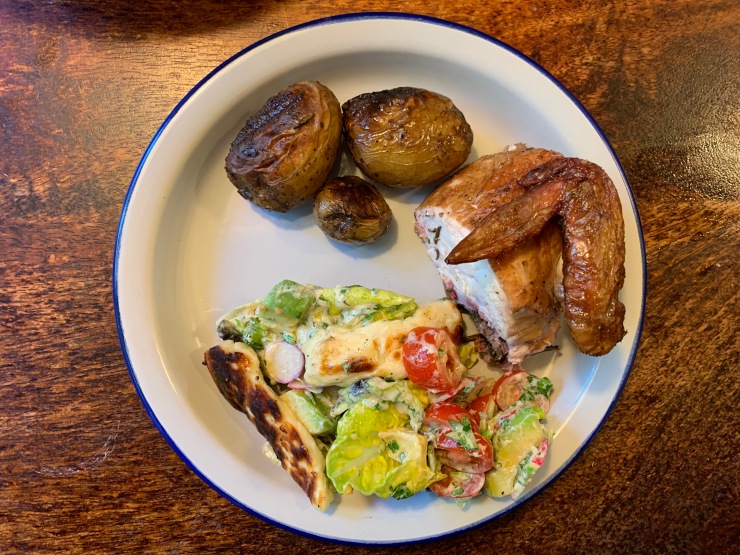 In this recipe I’ve ramped up the smokiness by using some cherrywood smoking chips, and ramped down the usual barbecue spice rubs you tend to find in these recipes, in order to get a purer smoke-and-chicken flavour. The chicken will cook through the same either way using this method, but in for a penny, in for a pound: More smoke is good.

I also threw a foil packet of potatoes, herbs and butter onto the grill cause, if you’ve gone to the trouble of lighting the thing, you may as well make the most of it.

This is a pretty low-intensity cooking experience too. It’s a good one to do when you have some friends over, in a warm, sunny garden, with some suitably ice drinks nearby. It’s ready when it’s ready, so your only job is to sit there and keep an eye.

For fours people, you will need:

For the chicken and potatoes –

Non essentials that are extremely useful –

First, stick your charcoal in your lighting chimney (or light it however you usually do) and make sure it gets a good start using whatever method you trust most. Pop your wood-chips, in their bowl of water next to the grill in readiness.

Whilst your charcoal lights, pat the chicken dry all over over using paper towels, then season it generously, bottom and top, and inside. Take half your herbs and tuck them into the cavity of the bird.

Make a cross with two pieces of tinfoil measuring a half-metre or so, dump your freshly washed potatoes in the middle of it (they don’t need any especially diligent drying), scatter over the butter cubes, the rest of the herbs, a generous hit of salt and pepper, and wrap all four sides up into a tidy, relatively air-tight package.

Check on your charcoal, and make sure it’s all red-hot with a white ashy surface, then pile it up on either side of your barbecue, with none at all (or at least as little as possible) in the middle. The aforementioned lighting chimney makes this job far far easier, but with a sturdy gardening glove and some long barbecue tongs, you should survive. The idea is that no coals will sit beneath the chicken as you cook, and it’ll just be the ambient heat of the charcoal that does the work. 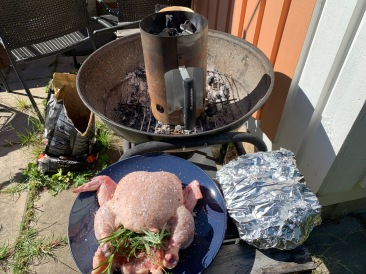 Drain your wood chips from their bowl of water, and scatter them over the hot coals, then put the grill in place and put your chicken and the foil potato package over the middle section, with no coals underneath.

Clap the lid onto your barbecue and, pretty much, let the chicken get on with cooking. It’s probably wise to give it a quarter turn every 15 minutes or so, just to compensate any potential cool spots in the barbecue, and I tend to try and keep a pretty close eye on the coals, fanning or blowing any that look like they might be going cool but, by and large, this takes care of itself.

It’s hard to give specific timings for barbecue cooking. This recipe has taken me anywhere between 40-75 minutes. The best thing to do is keep an eye on it and take the odd temperature reading from about 40 minutes in, removing the bird from the grill when the deepest part of the flesh, in the breast part nearest to the thigh, reaches 72°C. If you don’t have a temperature probe, your best bet is to stick a knife or skewer into that are of meat and make sure any and all juices are clear and free from blood. Once your chicken is cooked, remove it to a warm plate, loosely cover it with foil, and give it 15-25 minutes to rest. It’ll be all the better for it.

In the last 30 minutes of cooking time, move your potato package over so it sits above the coals. You should hear an encouraging bubbling from within. I tend to test them for doneness by giving them a squeeze, with an oven glove on, through the package, but you can always open it ip and give them a poke when you think the time has arrived.

Carve the chicken up how you like (I tend to just take a cleaver to it and separate it into eight parts, but I realise such brute force isn’t everyone’s cup of tea) and stick it in a warm bowl, alongside the potatoes and whatever salad you feel best accompanies a barbecue (I mix some of THIS DRESSING with an equal quantity of full fat greek yoghurt and a handful of chopped parsley mix it up with a simple green salad, perhaps garnished with a little halloumi grilled over the last of the embers) and let everyone dig in themselves.

I realise, written down, this all looks a lot but really, by the time you’ve done this just once, you’ll never want to cook a chicken by any other method again. It really is quite perfect.